Control (Or the lack thereof.) 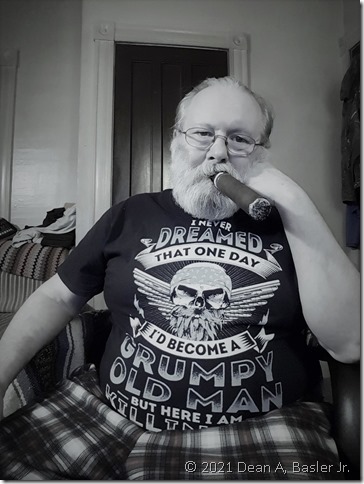 Well it is Sunday, and while I was doing laundry, my mind started racing and I got a pretty fucking big bug up my ass. So while while I was taking care of the laundry, I decided to fire up LibreOffice Writer and put my thoughts to actual words on a computer monitor. Read at the risk of your sanity. You’ve been warned.

The one thing that I have taken away from my sixty-two years here on earth is, pretty much everything is about control. People, corporations, politics…there always a constant about it. Control or the lack thereof. You see it every day but by dint of human nature, you will always turn a blind eye to it except when it affects you directly.

The whole stimulus check debate is a prime example of certain people attempting to exert control over the American people. On the one hand, we have the idiot-in-chief and Democratic left wanting $2,000 stimulus payments to go out to the public. On the other hand, we have the Republican left wanting to deny them because the money can be “better spent” on pork-barrel items that don’t help the American people directly. The pork-barrel projects mainly benefit corporate interests, which in turn gives them the impetus to contribute to candidates who’s self-interests in maintaining control is their primary motivation, not the benefit of their constituents. Mitch McConnell’s state is a shining example of that. The per capita income of his home state of Kentucky is $28,178, while the per capita income of the state of New York (where I reside) is $39,326. 16.3% of the population in Kentucky can be considered in poverty, while the figure is 13.0% for the state of New York. (The data comes from the latest U.S. Census figures.) Why doesn’t McConnell push for more programs that benefit his home state and help lift his constituents out of poverty? It’s all about pandering to the corporate interests that KEEP HIM IN CONTROL of the U.S. Senate. (Although the Senate runoff in Georgia might change that, and that has him shitting his pants. The other thing that bothers me is WHY THE FUCK was he reelected? The best I can figure is, the conservative right or what passes for it now, knew exactly which buttons to push with the populace, which is overwhelmingly evangelical Christian and has a bit of the “Old South” racism still.)

Another example is Donald Trump (otherwise known as the idiot-in-chief.) He’s always defined his life as being in control. From his real estate holdings, his “brand,” all the way to his rise to one of the most powerful positions in the world, it’s always about him “being in control.” Psychiatrists all over have pretty much diagnosed him (despite the presence of Section 7 in the American Psychiatric Association’s Principles of Medical Ethics, otherwise known as the “Goldwater Rule”, which says that it is unethical for them to diagnose and give an opinion of public figures who they haven’t examined) as a sociopath and has malignant narcissism. This is a dangerous combination for someone in control of the United States. You could see his “control” over the past 40 years in the public eye, from all the high stakes business deals that he bulldozed through, his hosting of a “reality” program (The Apprentice,) the 2016 presidential debate, where he stood behind Hillary Clinton’s lectern in an attempt to intimidate her, and up to the present day, where he used intimidation tactics to ram through legislation that is counter to the interests of the American people in general. His constant use of Twitter is another example of him trying to assert control of the narrative. Every time that something goes against his “alleged” Adderall-addled viewpoint, he goes on Twitter and starts whining about various conspiracies that stand in the way of his “control.” Things such as “The Deep State.” “Fake News.” “Rigged Election.” It’s all a grand conspiracy to bring him down and strip him of his “wealth” (which is pretty much a delusion rattling around in his head, supposedly.) His constant denigration of anyone or anything that goes against him is another attempt to exert control over the narrative and keep the bullshit alive to distract the populace from the fact that he is NOT IN CONTROL! The revolving door of people in and out of his employ over the past four years is an indication of someone who is a “bad boss.” People can only stand so much bullshit before they throw up their hands and say “fuck it, I am outta here.” Oh, but everything is fine and dandy because the president “is in control.” (I almost spit up my coffee when I wrote that.)

Now, with Trump throwing his support behind $2,000 stimulus payments to the American people, and his trumpeting that he pushed the COVID-19 vaccine through (which is bullshit because the first one that was approved, the Pfizer–BioNTech COVID-19 vaccine was developed without government funding,) he again is trying to control the narrative. He wants people to think that he has their best interests at heart, but in reality what he is trying to do is polish the turd that his tenure as president has become. But I see it for what it is, the last desperate gasp of a drowning man. The truth of the matter is, he has never been in control. His insistence of everything being “my way or the highway” has turned most of the American populace and all the movers and shakers inside the Beltway against him, and he can’t fucking stand it. The next seventeen days (as of this writing) are going to be on everyone’s mind because we are going to keep asking ourselves “what the fuck is Trump going to do next?”

Whatever it is, it’s just gonna be another fuckin’ dumpster fire that Biden is going to have to put out.

Show me the fuckin’ proof

“I am a pragmatist. I do not speculate, I do not use blind faith to make choices. I need facts to make decisions. I don’t believe in something until I have proof that I should believe in it. I am an advertiser’s worst nightmare. I don’t buy a product because someone says it will make my life better. I have to believe that it will have some benefit to me.”

Now, people that I have thought of as rational people are getting their knickers in a bind because of vaccines again. Yes, they are fast tracking a vaccine for the coronavirus. And I hope that they can find an effective one. I for one, do believe in the value of vaccines. I DO NOT believe that they are the cause of autism. I DO NOT believe that Bill Gates is trying to usher in a “New World Order” by getting everyone vaccinated and have a microchip implanted so we can be tracked by RFID. The autism-vaccine link? It’s been debunked time and time again. I get the flu vaccine every year and guess what? I DON’T HAVE AUTISM! AND I DON’T GET THE FLU! Do a little fuckin’ research and grow a fuckin’ brain, people. Like I did:

Snopes: Study Alleging a Connection Between Vaccines and Autism ‘Unpublished’ By Journal

Centers for Disease Control: Vaccines Do Not Cause Autism

USA Today: Fact check: Bill Gates is not planning to microchip the world through a COVID-19 vaccine 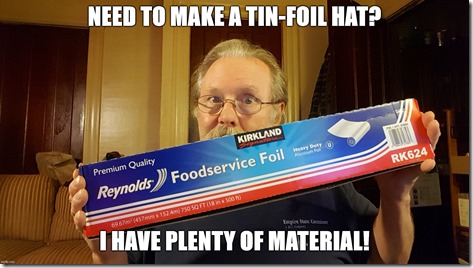 What it boils down to is, if they come out with a  tested, proven, and safe vaccine for the coronavirus, I’ll get it.

Excuse the fuck outta me if my pragmatism gets in the way of you denying me the right to make my choice whether to take a vaccine or not.

One of the things that have happened to me is because of the Coronavirus outbreak, I have resumed doing videos and posting them to my YouTube Channel, which kind of let fall to the wayside given that I work full time, and usually am too tired (or in the case of Fridays, have been drinking.) The sheer insanity of what has been going on has put a major bug up my ass, and given that I have a very nice camcorder that my hubby got me for Christmas a few years back (a Canon VIXIA that shoots in full 1080 HD video,) I figured that I would charge it up, mount it on my GorillaPod 3X, and cut loose.  I am playing it smart this time though, and only posting videos while I am sober.  That way, I don’t come across looking like a total ass, which if anyone has seen previous videos, shows that I can be a total ass.  So, without further ado, here are my three latest videos:

Alrighty then…Andrew Cuomo is doing everything that he can to contain COVID-19.

Trump has EXPERTS telling him what needs to be done, but all he is concerned about is how well he is doing in the polls (which isn’t good, from what I hear.) So he thinks that giving every American family a check for $1000 is doing some good?

Nope, he is trying to polish the turd that his Presidency has become. He is hoping that the $1000 checks will make people WANT to vote for him. It’s bribery, plain and simple, and it is coming out of our tax dollars.

His right-wing supporters will cry “IT’S SOCIALISM!” But those assholes will be the first to line up outside the banks to cash them.

Grow up and grow a brain, America

Isn’t this how the first Resident Evil movie started?

About the whole bullshit about the COVID-19 (aka the Corona Virus.)

One: I wash my hands after I piss and/or shit.

Two: I cover my mouth and nose when I sneeze, and if I am near a sink and soap, I wash my hands.

Three: I am not obsessive-compulsive about using hand sanitizer (but I will do so if I am not near a sink and soap.)

Four: I do not listen to the bullshit coming out of Donald Trump’s mouth about the Corona Virus.

Five: I do listen to what the WHO (World Health Organization) and the CDC (Centers for Disease Control) have to say.

Grow up and grow a brain, America