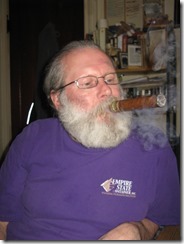 I’m starting to become more disillusioned with humanity in general. People are more concerned with the accumulation of material wealth than the accumulation of spiritual wealth.  Life now has become a game of oneupmanship, i.e.  "I have it all, and you don’t have squat."  Is it any wonder why I have become pragmatic, cynical, and misanthropic?  The daily ride home on the cattlecar has given me a glimpse into the future of our species, and guess what, boys and girls?  It ain’t fucking pretty.

My husband is pushing me to be more "social," but given my attitude, I can’t stand other people.  The people at work?  I tolerate them.   I have to work with them, in order to keep my job and keep a roof over my head.  But seriously, don’t expect me to interact with them outside of the workplace.

The so-called people on the cattlecar, well you all know that I express my disdain for them here on Facebook.  (Social media my ass, it should be called "anti-social" media.)  I didn’t go to the St. Patrick’s Day parade because I didn’t want to see a shitload of people turn themselves into total assholes.  (Plus I have a total disdain for anything having to do with Irish culture, even though I have Irish ancestry.  I’m an AMERICAN, goddamnit!)

And this obsession with celebrities and fame?  Big fucking deal…people go insane because Justin Bieber gets arrested for doing shit that the average person would either lose their job over or go to jail.  (And given that he is a Canadian citizen, if he gets convicted, the minute his twink ass is released from jail they should deport his ass and bar him from ever returning.)  Meanwhile, when the rest of you are crying while listening to his songs, I’ll be in my den, reading a book and listening to classic rock streaming on my computer, and chuckling silently over the behavior of "The Cult of Bieber" (which is kinda like Scientology.)

So I am just gonna shut the fuck up now, light up a cigar drink my Dunkin’ Donuts extra-large black decaf, pick up a book, and shut the fucking universe out.